A blockchain is the backbone of any cryptocurrency including Bitcoin.

Jump on in to Aleta's blog about the antiques world in New South Wales, Australia, and the wider world.
Find out the facts, the goss and the 'how-to'. And do let me hear from you!

The Hobart Collectors Antique Fair, held in conjunction with the Hobart Wooden boats Festival,
will take place on
Friday 10th February through Monday 13th February 2017
at the beautiful
City Hall 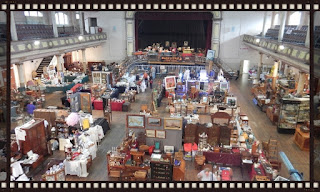 Four Fantastic Ways to Engage With Your Social Media Community

How to engage on social media: I think we probably all do a couple of these by instinct, but it doesn't hurt to be reminded, and you might pick up a new idea. Nice video by a fellow called John Albertini.
No comments:

There's been a significant art heist in Verona, Italy.


The mayor of Verona is quoted as saying that the theft must have been 'specially commissioned by someone because the thieves were well timed, well organised and knew what they wanted'.

Article on the art theft from The Art Newspaper.com

Things like this always amaze me. Martin and I have had discussions about the motives for this type of heist and the dispersal of the bounty.

I still don't understand. What on earth are they going to do with it? One can't exactly show off to one's friends with a, 'Here, look at my priceless collection of stolen art.'

Anyway, I'm just glad no one at the museum was hurt.

Is it or isn't it? Art dealer may have found a sculpture by Donatello

Oh, it would be so brilliant if this were true. Art dealer Andrew Butterfield thinks he's found a heretofore unknown sculpture of a putto by Renaissance artist Donatello. Well, not quite unknown; there was a similar piece at the Museum of Fine Arts in Boston, but a curator pronounced it not by Donatello, which meant that no one was going to take a punt on this one..

Anyway, it's a bit complicated, but the New York times has a good explanatory article:

New York Times article on the lost Donatello
No comments:

The Antiques Fair circuit in Tasmania is a lively one, and a new player has stepped modestly into the ring. The Ulverstone Rowing Club is the latest organisation to hold a fundraiser in the form of an antiques fair, and the inaugural is due to take place over the weekend of the 4-6 September 2016.

We hear that there has been such an influx of young people into the rowing club that they cannot afford boats for them all.

Well, anything that advocates halesome activity for kids is fine with us.

We've had no word on how the Strathalbyn Antiques Fair went this weekend. Usually Australian antique dealers are tripping over themselves to get their ha'penny's worth in, but it's been surprisingly quiet.

I'm not quite sure what to call this fair; I've seen it variously described as a long-running South Australian event, and as 'the Inaugural'. I think what's happened is that a long-running (20 years +) fair has been sold, reorganised, and repackaged into what sounds like a more upscale affair. It takes place in various venues around the town, which sounds like fun.

I hope it went well because that's good for the industry.

Did you attend? Do let me know how things went.

Whether you're in the mood to buy or browse, there's always eye candy at Aleta's Antiques.

In addition, you can find information about the many services we offer: appraisals, buying deceased estates, valuations, and search-and-purchase.

You'll also find our ever-expanding fair schedule - you never know when we might be coming to a venue near you.

Join Martin & Aleta at Google Plus

Please type the email address in to your email program.

Thou Shalt Not Steal

Please, friends, copying anyone's material without their permission is a theft of their work, so don't do it.

Attribution is not enough: Ask first!

To ask me for reprint permission, write to me, Aleta:

Please type the email address in to your email program.

that's life!
This blog is brought to you by a family-owned business group encompassing Tallong Constructions, Tallong Enterprises and Aleta's Antiques.